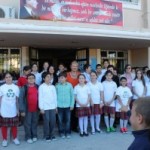 Atatürk Primary School Students, During the Award Ceremony
In the year of 2012, 10 project teams successfully completed their projects. The collaboration was realized with the Beyoğlu Educational Directorate of Istanbul city. The special theme of the year was improving the quality of education in Beyoğlu district. Galatasaray High School was volunteer about it. That school is one of the most outstanding Turkish schools of that region. The Award ceremonies were realized in every school’s own Hall. The awarded school of the international category got the award from the hands of Prof. David Hutchins ve Prof.Dr. Dinesh Chapagain during the National Convention of Students’ Quality Circles of Nepal.